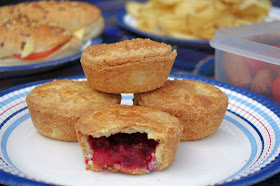 I've been lucky enough to enjoy some of the action in the Olympic Park this week and I wanted to soak up the atmosphere by enjoying a picnic in the park after a spot of athletics on Monday morning. So I packed up my sandwiches, crisps and other picnic goodies and as a tasty treat I made these pies to take too. I loaded them up in my Olympic regulation sized bag and took them to the park for lunch. I was a bit worried they wouldn't make it in one piece when my bag went through the scanner and was deemed to be suspicious, after a bit of rooting around from a rather dashing army man my pies were cleared! 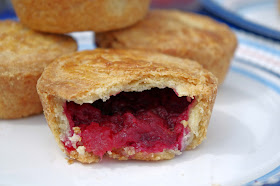 The action in the athletics stadium during the morning was amazing and the atmosphere electric! After the excitment of the morning we found a spot for our picnic and spread the picnic blanket, we were even overlooking 'Gloriana' on the lock. I am happy to report the pies were in one piece and were really tasty. The pastry was sweet and soft and the classic combination of apple and blackberry can't be beaten. So all in all a success! 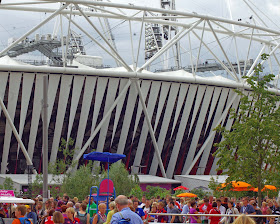 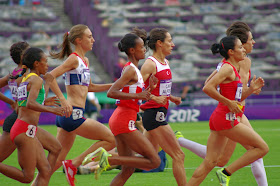 The recipe for these pies came from Bakingmad.com. I slightly misread it and added the demerara into the pastry which should acutally have been sprinkled on top. I also found that the flour and butter was a bit dry and didn't bind together in a ball so I added in an egg yolk. It worked well and it was a good pastry. It was however a little difficult to get them out of the muffin tin at the end, a number broke, so obviously I had to eat them then and there! ;-) If you were to make these I'd recommend not making the pastry too thin as they may then be less liable to breaking upon removal. I'd also add more filling next time as I was a bit weary of over-filling. Finally, I might also up the blackberries in the recipe. 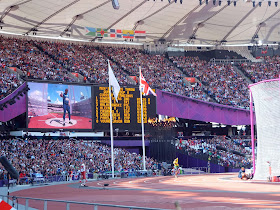 These pies would taste delicious warm straight from the oven with a scoop of vanilla ice-cream! I'm entering them into this month's Tea Time Treats hosted by Kate at What Kate Baked and Karen at Lavender and Lovage. These Olympic Park Pies are particularly apt as Kate was a cloud wrangler in the Olympic opening ceremony no less! 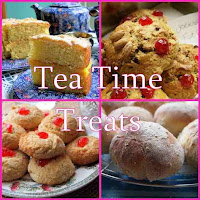 We had the most amazing day at the Olympics, it has truly lived up to it's billing as the 'Greatest Show on Earth'. We even managed to catch a glimpse of Andy Murray, Greg Rutherford and Laura Robson at the BBC. In the evening we were also lucky to see some beach volleyball at Horse Guards Parade where we enjoyed another pie or two!! ;-)

The recipe suggests putting the flour and butter into a bowl and rubbing them together...being a bit lazy I used a food processor, either is fine! Then add in the sugar and a pinch of salt. The original recipe only called for the golden caster sugar...I also added the demerera by accident but it tasted really good...so again your call. The pastry should come together in a ball, so I add an egg yolk to bind it but maybe see how your pastry goes. This recipe produces a rich sweet shortcrust pastry, especially with the addition of the egg. The pastry should then be wrapped in clingfilm and chilled for 30 minutes.

To make the pie filling, peel, core and chop the apple and pop it into a saucepan with the golden caster sugar and 2 tablespoons of water. Heat gently until the apples begin to soften and then add the blackberries and leave on the heat for another 5 minutes. Whilst the apple and blackberries and cooking, lightly grease a muffin tin. I made 12 pies but the recipe says it makes 18.

When the pastry has chilled for at least 30 minutes, roll it out on a lightly floured surface and cut out 12-18 7.5cm circles and then 12-18 6cm circles depending on how much pastry you have and how many pies you are making.

Gently use the larger circles to line the muffin tin holes before spooning in the filling. Dampen the edge of the pies before pressing on the smaller circles to form lids. I did not cut any holes in the top of the pastry. Brush the tops of the pies with beaten egg and then put in an oven preheated to 200c/180c fan/gas 6. They take around 20 minutes to bake and should be golden when done. Leave to cool in the tin for 5-10 minutes before VERY gently removing from the tin. Enjoy!