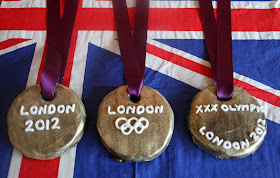 What a phenomenal ﻿two weeks...who could have predicted that London 2012 would have gone quite as well as it has! I'm just settling in to watch the closing ceremony and quite frankly I'm not sure what I'm going to do with myself next week with no Olympics to watch!

To celebrate Team GB's success I made these Gold Medal Millionaire Shortbreads as we have won a staggering 29 gold medals in total which is 10 more than in Beijing and puts us firmly in third place on the medal table...amazing! 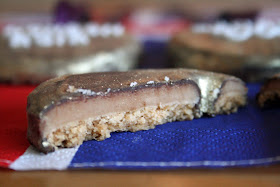 Once they were baked and cooled, the next step was to add the fudge layer. The recipe suggests taking two fudge squares and then pressing them into shape on top of the biscuit but this seemed a little bit fiddly. I decided to take all the squares and microwave them for 10 seconds, knead them into a ball, roll it out and then cut out circles with a cutter. This method worked really well as all that was needed was to place them on top and press them down.

The final step was to melt some chocolate and then spread it over the biscuits, once this is set you can brush each one with gold lustre dust. I then mixed up some royal icing and piped on the Olympic rings etc and threaded the ribbons through. Below you can see the actually gold medal which depicts the Greek goddess of victory, Nike. I did consider trying to recreate this in royal icing but decided it might be slightly beyond my piping skills! ;-) These are lovely cookies which could be made in future to celebrate other successes!

To finish, I wanted to share with you my favourite purchase of the last couple of months...a Wilton Cookie Spatula. I bought it on impulse but have actually found it really useful as once you've cut out your cookie you can then use the spatula to transfer it to the baking sheet without mishaping it. I also used it today to pick up my fudge circles. You could certainly live without one of these but it's a handy little tool which gives you a neater finish and I've used quite a lot already! :-) 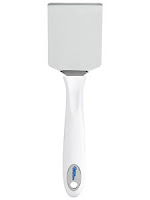 Lightly grease a baking sheet and preheat the oven to 160c/140c fan/gas 2. These are simple to make, just place all of the shortbread ingredients in a food processor and mix until they start to come together as a dough. Knead lightly and then wrap in clingfilm and place in the fridge for 30 minutes.

After the 30 minutes, roll the dough out on a floured surface, it should be about 5mm thick and you should be able to cut out around 12 7cm rounds. Use a nozzle or a drinking straw to cut out a hole at the top of each shortbread if you wish to string them with ribbon. Prick each biscuit twice with a fork. Bake for 30-40 minutes until golden. Once baked, leave to cool.

To add the fudge layer, take around 24 pieces of fudge, although you may need more, and place them on a plate in the microwave for 10-20 seconds. They should then be nice and soft and it will be possible to knead them into a ball.  Roll out the fudge to about 4-5mm thick and then cut out circles the same size as your biscuits. Make sure to add the ribbon hole too. Press one circle of fudge onto each biscuit. Leave to set into position for around 30 minutes.

Melt the chocolate in the microwave or a bowl over boiling water and the gently spread over the biscuits ensuring all the sides are covered. It is best to do this on a cooling rack so the excess chocolate drips off. Leave the chocolate to set before brushing generously with gold lustre dust. Finally, string with the ribbons and then pipe your chosen designs on top. Enjoy! :-)
Laura at 9:11 PM
Share